Poised over a medical model of a detachable penis in his office at St. Joseph’s Hospital, Dr. Stephen Pautler quips, “to screen or not to screen, that’s really the question.”

Shakespeare he’s not, but as a urologist for almost 20 years, Dr. Pautler knows a thing or two about prostate care.

“There are a lot of misconceptions out there. I call it coffee shop talk – where men share the worst stories they’ve heard, leading to misinformation and potentially dangerous consequences,” says Dr. Pautler.

So why is it important to screen for prostate cancer?

“One in seven men will have prostate cancer in their lifetime, so men should stay on top of it,” urges Dr. Pautler.

Despite such staggering rates, the number of men proactively screening is actually decreasing. 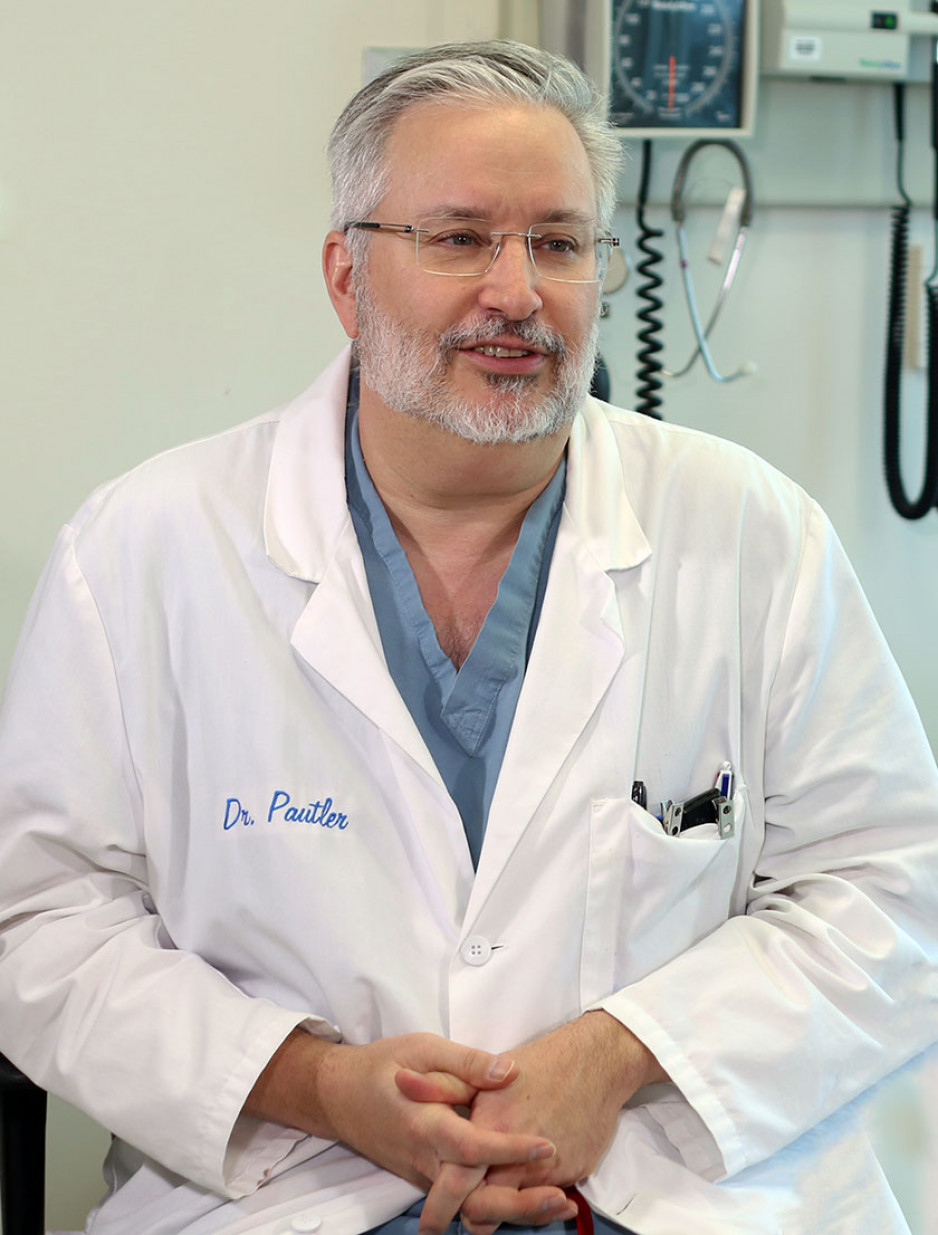 “It’s a bit complex, but basically a study came out from the United States in 2011 saying screening doesn’t save lives,” said Dr. Pautler, adding that the study was flawed. Subsequently, a Canadian panel recommended against screening based on this work. Years later, a second study from Europe is back-tracking on the original findings, saying screening does in fact reduce mortality.

“Sadly, there weren’t any urologists on the first study panel. In the end, the recommendation that infiltrated family doctor offices was `don’t bother offering prostate screening, it doesn’t help’. Now we are stuck with this false information in the community that we need to combat.”

An associate professor of surgery and oncology at Western University, lead for Southwest Regional Surgical Oncology at Cancer Care Ontario, a Canadian pioneer in surgical robotics, and an all-around cool guy, Dr. Pautler is an internationally-acclaimed and highly respected leader in prostate care. He has been watching the changing tide of screening opinions over many years.

“Canada and the United States have come to the decision that not screening is a grave mistake, and that options should always be discussed with the appropriate men,” says Dr. Pautler. “If a man is 50 to 70 years old with a minimum 10 years of life left, it’s time to talk about options.”

Prostate screening – nothing to shy away from

“PSA is a simple blood test that looks for levels of a protein in the blood,” explains Dr. Pautler. “PSA is made by the prostate, and high levels mean a higher risk cancer is present. But this test isn't perfect, as it can sometimes come back with inconclusive results or false positives.” 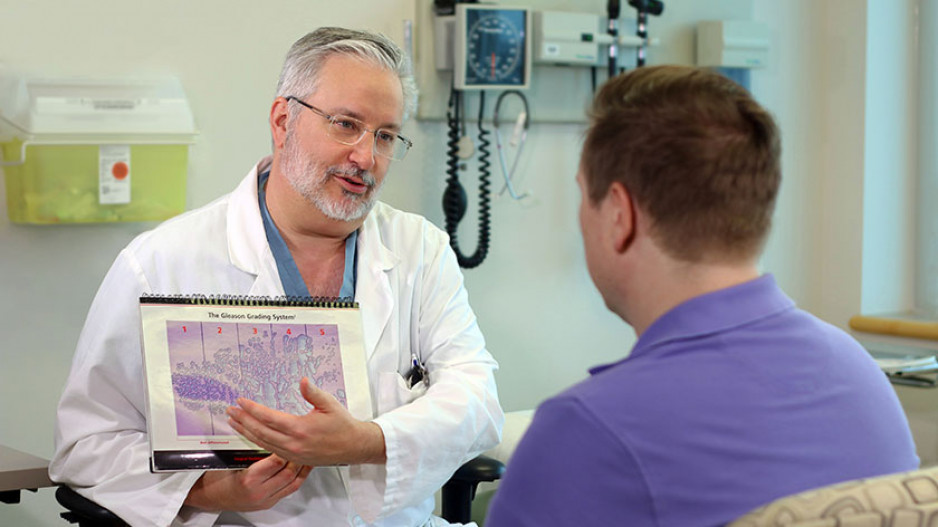 The second part of the screening is a rectal exam.

“In my experience, men tend to build up this little exam in their heads. We are simply looking for lumps and bumps, which is a key indicator and an important thing to check. I’ve been in this field a long time, and the hype men give this is way worse than the exam. Men really need to move past the perceived awkwardness – because it’s important.”

In addition to rectal exam dread, men live in fear of other aspects that can result from screening.

“There is a three per cent infection rate in biopsies and if someone needs treatment for a positive cancer result, sometimes that treatment, namely surgery or radiation, can cause incontinence and erectile issues. These are the types of conversations happening at the coffee shop, when truthfully there is so much more to the picture,” says Dr. Pautler.

Men who get screened are in a better position to make educated decisions and to discuss options, one of which is ongoing surveillance.

“We look at family history, consideration of lumps, the PSA test and use clinical scales and formulas that help us calculate cancer risk for men.”

If someone has an abnormality on a rectal exam or their PSA test is concerning, they get referred to the Prostate Diagnostic Assessment Program at St. Joseph’s Hospital. If their risk is found to be low, the care team and the patient may decide to just wait and observe.

“There are lots of options,” says Dr. Pautler. “If a man is diagnosed with prostate cancer it may not be life-threatening. Options include surveilling the lump and doing repeat biopsies to ensure it doesn’t get out of control. In every case we tailor the treatment for the individual based on their health. If there is cancer that requires treatment, patients may undergo radiation or surgery. It’s through those interventions where the risk of incontinence or erectile dysfunction happens but, in many cases, function is restored. If it’s not, then there are still more options.”

There is much discussion in the medical world recently of cancers, like prostate, being treated as a 'disease of aging’ and understanding that the spectrum of severity is quite broad requiring everything from a watchful eye to tumor removal, says Dr. Pautler.

“I’ve worked with patients in almost every instance. Some are fine with just monitoring for years and others want or need to take immediate action. It’s about understanding and shared decision making.”

The trouble with prostate cancer, however, is that men aren’t taking the first step.

“They aren’t even getting to the doctor’s office for screening, and that has to change,” says Dr. Pautler. “The recommendation is to get screened at age 50, or 45 if you have an increased risk. Most family doctors can perform the screening and if concerns arise, men can be referred to the Urology Centre at St. Joseph’s or another program close to home.”

For Dr. Pautler, it’s about being informed.

“If it were me, I would want to know. After that, men can work with their care team to decide what’s best for them. It would also be helpful if men would put a lid on the misconceptions and spread the word about the reality of prostate screening – how it’s really not bad, it’s important, and can save a life.”

We help people reclaim their health and independence through new treatments made possible by medical research and innovation.

You can support discovery, dignity, compassion, care, spirit and innovation by donating to the St. Joseph's Health Care Foundation.