Seventy-four-year-old Art Jansen sits in a sunny cafeteria at Parkwood Institute after an outpatient rehabilitation therapy session. While donning a mask and keeping socially distant, he gazes proudly at recent photos on his phone –one of them is of him smiling, a medal around his neck, after completing a triathlon.

Not just any triathlon - but a family held and organized event just for him to mark his long journey of recovery, hope and determination.

Art has a lot to be proud of these days. On Nov. 11, 2019, he suffered a devastating stroke due to complications following a heart infection. The stroke left him paralyzed on one side of his body and he lost the ability to speak, eat and walk. 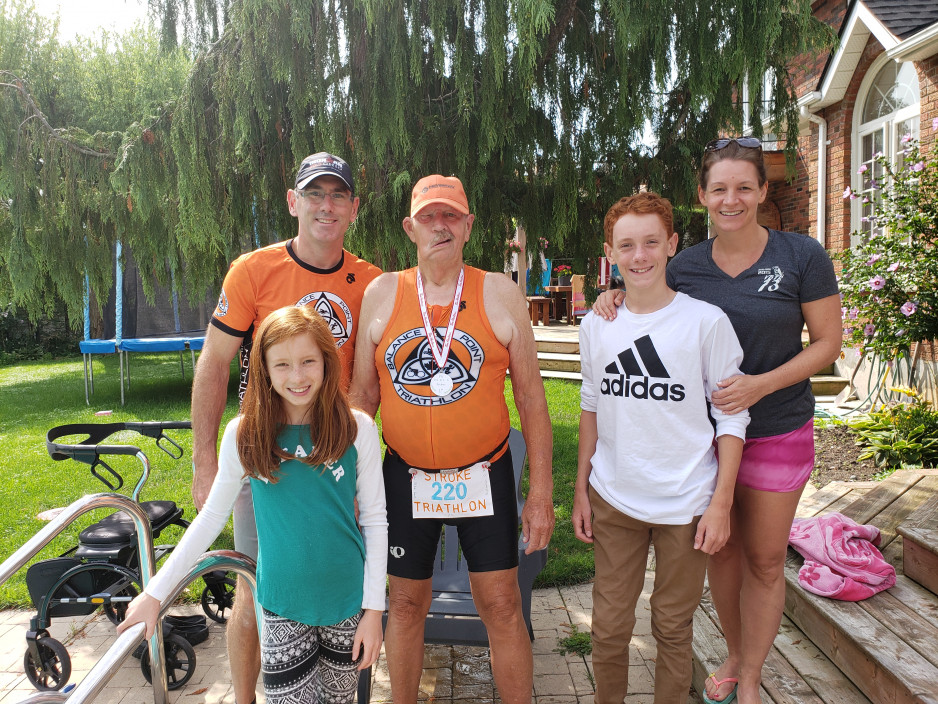 According to the Public Health Agency of Canada, strokes are the leading cause of adult disability in the nation and the third leading cause of death. Every year, nearly 14,000 Canadians die from a stroke.

Art was at his home, just outside of London, the day that his life changed. He experienced weakness in his arms and face and immediately called 911. After spending a month at London Health Sciences Centre’s University Hospital to treat his heart, Art was then transferred to the Stroke/Neurological Rehabilitation Program at St. Joseph’s Parkwood Institute, where he received rehabilitation care as an inpatient for the next nine months.

“It was a very difficult time,” recalls Art. “It all happened just as the COVID-19 pandemic began and everything was locked down and uncertain. I would have virtual visits with my family and my daughter would sometimes visit through a closed glass window. I was very isolated.”

Despite his condition and a global pandemic unfolding, Art was determined to push forward.

“It’s easy to just quit and give up during tough times,” says Art. “I knew I had to stay positive and set some goals for myself.  I knew I had to keep going.”

With the help of St. Joseph’s stroke rehabilitation team, which included nurses, physicians, speech pathologists and physiotherapists, Art began his journey of recovery. He worked daily in the gym on his strength and balance.  Eventually, he also took short walks outside the facility grounds and regained his speech.

St. Joseph's inpatient stroke program is specifically designed for individuals who have had a stroke or other neurological condition and would benefit from the expertise of a team to achieve their rehabilitation potential. The length of stay varies and is determined on an individual basis. A variety of approaches are utilized on a 24-hour basis to facilitate a patient's progress towards improved function and independence.

“I was on the list for a long-term care facility,” says Art. “But because of the progress I made during my rehabilitation care - I was able to transfer to the outpatient program and live independently in my son’s home.”

Now as an outpatient at St. Joseph’s Comprehensive Outpatient Rehabilitation Program, Art receives in-person therapy sessions twice a week and remains grateful for the care he has received.

“The stroke rehabilitation team at Parkwood Institute are amazing,” says Art, who plans to volunteer with the program as a way to give back once safe to do so. “They couldn’t do enough for me and they were dedicated to seeing me get results and succeed.”

And succeed he did – after being discharged as in inpatient in July of 2020, Art began a rigorous training session with the support and encouragement of his two children and grandchildren. Having come from a naturally athletic family, Art was an avid skier, swimmer and biker prior to his devastating stroke.

To celebrate his progress, his family held and organized a mini stroke triathlon on Sept. 6 – just for him - at his son’s place.  The triathlon consisted of a 2.2-kilometer walk around his block, a 10-kilometer bike ride, using an exercise bike, and 10 laps around his son’s pool. His grandchild made signs, a metal, and encouraged him all the way. The triathlon took Art one-hour and 18 minutes to complete.

“To have my family’s support throughout this journey has meant everything to me,” says Art. “It was an amazing feeling to cross that finish line.”

Yet the medal around his neck – as he takes another glance at his photo - doesn’t quite match the victory that he now feels with his new-found sense of independence. Next month he will be moving into his own apartment just a short walk from his son’s current home. 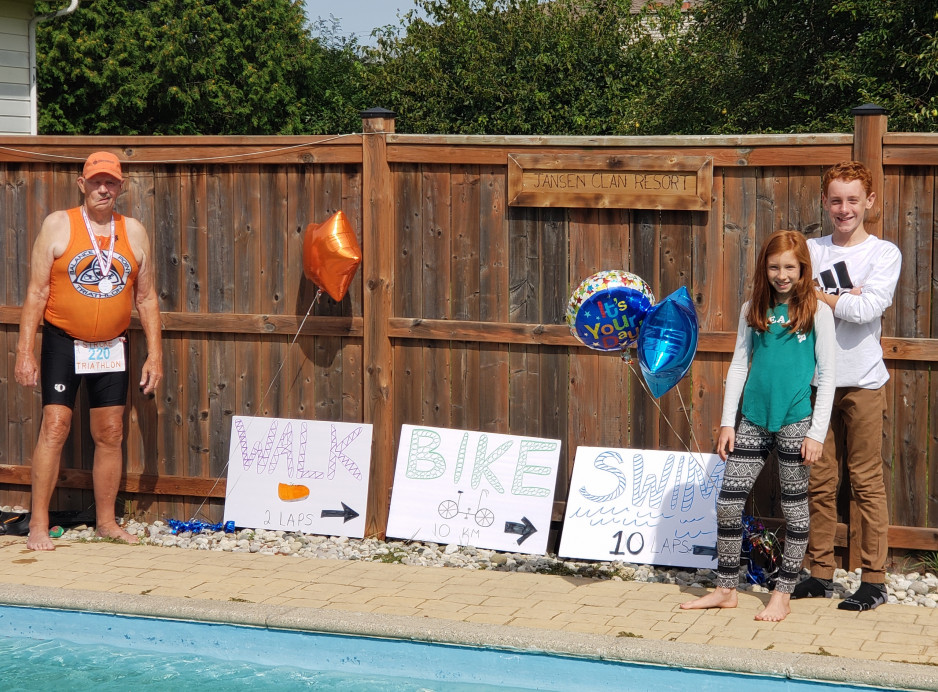 “You don’t realize how important your independence truly is to you until it’s suddenly taken away,” says Art.  “My journey has not always been easy, but I want people to know that they can accomplish their goals if they believe in themselves. The goals might look different and that’s okay - it doesn’t have to be a triathlon. What’s important is to stay positive and keep moving forward throughout your recovery. It really does make a difference.”

This story appeared in Issue 03 of My St. Joseph's. View more inspiring stories from the magazine.