Jill was watching an episode of Oprah when she first discovered the lump in her right breast. Oprah’s guest was explaining how to check a bra’s fit and Jill was following along when she felt the mass. It was an anxious feeling given that she had recently been given a clean bill of health after her third mammogram in six years.

She quickly made an appointment with her family physician who brought her in for more testing. Indeed, the mammogram showed a tumor in her breast and the biopsy confirmed that she had breast cancer. The news was devastating and Jill felt her life turn upside down in an instant. But she was comforted by the confidence she had in Dr. Sarah Knowles, a surgical oncologist at St. Joseph’s Health Care London.

Jill initially had a lumpectomy, but the results from the procedure showed that the cancer had spread to her lymph nodes. Dr. Knowles recommended a mastectomy to prevent the cancer from spreading even further, which Jill knew was her best course of action.

Thankfully, after a successful surgery and short round of chemotherapy, Jill is feeling much better. She is cancer free and her prospects for a long and healthy future look promising. The key, she adds, was detecting the cancer at an early stage. Had she not discovered the tumour through a breast self-exam, she fears it might have been too late. She considers herself lucky and credits the care she received at St. Joseph’s Breast Care Program with saving her life.

“The incredible team of staff, nurses, doctors, and surgeons are truly a remarkable group of people,” says Jill. “We are very fortunate to live where we live, and benefit from such great resources and programs.”

As a gesture of gratitude, Jill and her husband Rob held an event to raise money for St. Joseph’s Breast Care Program. For years, they have maintained a hockey rink in their backyard for the family’s enjoyment, including their teenage son and his friends. Once every winter, they host a skating party and ask those in attendance to make a donation in support of a local charity. About 80 people attended the event, helping the Chapmans raise more than $3,500 for patient care equipment inside St. Joseph’s Breast Care Program.

It’s been a tough journey, but Jill will forever be grateful for the care and support she received. She hopes that by sharing her story, others will be encouraged to examine themselves for breast cancer on a regular basis.

Donors have the power to improve and even save lives. Your donations help St. Joseph's invest in healthcare innovation and discovery that would otherwise not be possible. 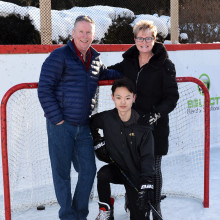 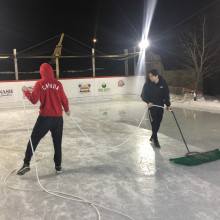 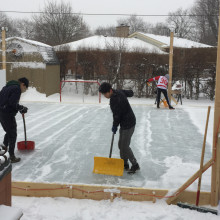 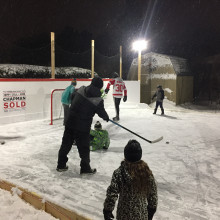